I hope this doesn’t offend anybody, but I’m going to show you a picture of a pub. I know it’s a bit mean at the moment, when we can’t go to the pub at all. But this is no ordinary pub. This is the Carlton Tavern in Maida Vale. You may have come across the story in the news recently. (Picture from Historic England).

The Carlton closed as a pub in 2015, and the owners applied for planning permission to demolish and build flats. But the local residents and supporters were having none of it. They campaigned, and the planning application was turned down. The campaigners then made their own application, to Historic England, to get the building Grade-2 Listed status. It was built in the 1920s and has architectural merit.

Two days before Historic England was due to recommend the listing, the owners of the building ordered its demolition, and sent in the bulldozers.

Normally in cases like this, the owners get fined, count it as part of the cost of redevelopment, and carry on. But the campaigners wouldn’t give up. They rallied round, they badgered Westminster Council, and finally the council ruled in their favour. The owners would have to rebuild the Carlton Tavern, brick by brick, and put it back exactly as it was.

And because the campaigners had made the application for listing, they had detailed photos and drawings and a plaster cast of every tile. To be fair, the owners took it on board. They rebuilt the entire pub. It is due to re-open for outdoor hospitality on 12th April.

It is an amazing story. A building that was gone, restored to life. We’ll think more about restoration and resurrection later.

We can imagine the reactions of those campaigners for the Carlton Tavern that morning, when they walked down the street where their treasured building was and there it wasn’t. There is that disbelief that comes when your eyes see something that your brain can’t make sense of. Then shock, and outrage, and deep dismay. But at least in their case it was obvious what had caused the damage – a bulldozer – and not hard to guess who was behind it.

The women who went to the tomb of Jesus on that first Easter morning were going to the place where their beloved friend and teacher was buried. They expected to the stone, the big stone blocking the entrance. And there it wasn’t. They went in to see the body – and the body wasn’t there either. They will have had all the same feelings of disbelief, shock, outrage. But on top of that, profound bewilderment. Who could have done this? And why would anyone want to?

I’m not sure the young man in white – where did he come from? – was much help. ‘He’s been raised, he’s not here’. Oh well, that’s all right then… – no it isn’t! None of this makes sense. No wonder they fled. No wonder Mark tells us they were too afraid to tell anyone. What could you possibly say to someone that would sound convincing?

We have had raising from the dead before this, in the gospels. Jesus raised Jairus’s daughter; the son of the widow of Nain; and his friend Lazarus. But this is different. In each of those cases, the raising happened in the presence of other people, so there were witnesses; the person was restored to the life they had known before – the little girl, and the widow’s son, given back to their parents; Lazarus back once again to his sisters and friends. And they would go on, each of them, to live a normal human life and one day die a natural human death. They are back to the way things were, rather like the Carlton Tavern – no less miraculous for that. This is true restoration.

With the raising of Jesus, we are in completely different territory.

There is nobody around when Jesus is raised. Nobody ever comes forward as a witness. Jesus is not restored to his friends. He appears to them, later, but this is nothing like the life together they once had. And the risen Jesus is different – he is both human and not human. He can eat and drink but he can also appear through locked doors. The whole event is shrouded in mystery.

In raising Jesus, God is going beyond anything that has been known before or since. God is breaking the barriers between life and death, between earth and heaven, between humanity and eternity. This is beyond restoration; this is resurrection. This is God doing something completely new.

The followers of Jesus cannot make sense of this with their minds, but they grasp the sense that something very special is happening. There will be, for them, no return to normal, not even normal bereavement. There is no going back – they can only go forward. And as they move on, day by day, step by step, they find in themselves new life, new strength and new hope.

In the first lockdown, last Spring, the URC produced a leaflet called ‘Ready for the new “normal”?’, later updated as ‘Emerging into the “new normal”’. It was guidance for churches on how to plan and pray about coming out of lockdown – and with it a recognition that when we did, we would not be going ‘back to normal’, to the way things were before. We would have some of our freedoms back, but we would have of exercise them in a much more conscious and careful way than before.

Well, since then we’ve been out of lockdown and back in again; we’ve had a tiered system and moved up and down between the tiers; regulations have changed so often it’s hard to keep up. The new normal, it seems, is not a new steady state replacing the old steady state; it is about moving and adapting, keeping up with the progress of the virus.

That’s happening in society, with the pandemic; there are also questions about moving forward in the URC: when you get chance to read your church magazine, you’ll see Peter has reported from Mission Council about a group looking at whether our current structures enable or hinder our faithfulness. That too may mean we need to move and adapt.

All this might sound unsettling. But it puts us right there, alongside those early followers of Jesus: finding ourselves in a new situation that we don’t fully understand, not exactly sure where we are, or where we’re heading, or how things will turn out in the long run. And we know, as they very soon learnt, that we are not alone, that Jesus is with us; that we too can walk forward, in confidence and faith; and that as we do, we too will find in ourselves new life, new strength and new hope.

I’ll end with the words I used as the call to worship:

And starting from today.

My promise is true

For I am Christ the Way.

A gospel of hope 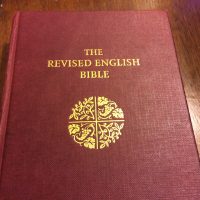